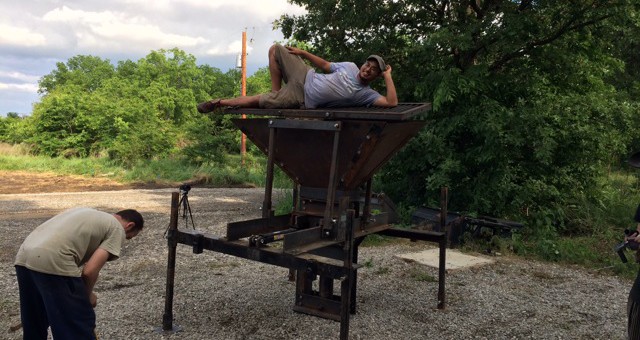 On Wednesday, interns at Factor e Farm for the 2014 Summer of Extreme Design-Build finished putting together an early model of OSE‘s CEB Press and made significant progress on the raised garden beds, repairing the Hab Lab and programming the CNC Torch Table.

After asking how well everyone slept through Tuesday night’s storm, Founding Director Marcin Jakubowski had the team review the progress they made the day before and discuss any issues they ran into. Additionally, Marcin and the interns went over the day’s agenda and made plans to eventually document how to use the CNC Torch Table once OSE overcomes some existing glitches.

The main goal for the morning design session was to begin and make progress on the CEB Press manuals using FreeCAD and Google docs. Marcin helped the interns individually as they worked on the manual for their part of the machine.

The interns worked in the shop and around the farm yesterday afternoon.

Just outside the main workshop, five interns finished reassembling the CEB Press that several others took apart on Monday. While the model they’re working with is older and differs from CEB Press 6, the model they’re making manuals for, going through the disassembly/re-assembly process enhanced they understanding of how the machine works. Four interns dug out holes in front of the Hab Lab where the raised-bed gardens will be. For the walls, they levelled out the wood frames they made Tuesday by building a short wall under them using dirt bricks from one of OSE’s CEB Presses. Interns (left to right) Graham Coffman, Juan Bennazar and Emily Dixon dig holes for two raised-bed gardens, while Molly Reichert cuts wood to use on the Hab Lab roof overhang behind them. Photo by Stephen Whiting The raised-bed gardens are almost ready to be filled with mulch and dirt. Photo by Stephen Whiting

Once the walls were levelled, they collected sticks, straw and brush to put in the garden beds with the dirt they put back to create a natural mulch that will develop as these things decompose under the soil.

Three interns worked close by on repairing leaks in the Hab Lab roof and finishing up the over-hang in the front.

Another three interns continued trying to figure out how to program the CNC Torch Table to pierce pieces of metal before beginning cuts.