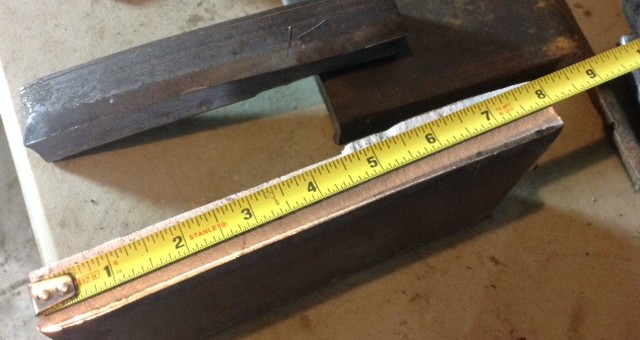 Last Saturday we accomplished a significant milestone in the GVCS development process. For the first time, we did a machine build at the same time that we uploaded media in realtime, and created an online instructional at the end of the build – realtime as well. And, we ended up with this machine for cutting metal slabs:

We did this with a build-documentation sprint on the Ironworker 3, where we disassembled a machine, uploaded pictures to Trovebox, and created an assembly instructional on Dozuki – where the instructional ended up online at the end of the same day. Further, we uploaded 7 clips of video footage, and next day, this video popped up via remote edit by Rob, our Documenation Manager:

There were four people involved throughout the whole process, two at Factor e Farm with the ironworker, and two remotely connected using Google Hangout:

Cutting Metal Like Butter
The end point of this is an ironworker machine for cutting large stock metal sections – a corenerstone of any metal fabrication shop. We have succeed in cutting up to 1/2″x12″ and 1″x8″.

See other data on blade gap and its correction.

Further – we have proven that our Modular Components – tubing and plates plus bolts – like simplified but lifesize Lego Technik – are capable of producing semi-precision machines that withstand huge forces while retaining precision – such as 120 tons of force at the cutting edge of the ironworker blade. Note that the gap has to remain at about 7 thousandths of an inch for the cuts to be clean. The ironworker machine exerts 120 tons on the cutting edge of the cutting blade.

The results indicate that we will be able to build frames for CNC Torch and Router tables, and even heavy-duty precision gantry CNC mills. We are considering hydraulic power + Arduinos as the low cost controls for the latter.

Our results with the ironworker machine also indicate that we can scale our small scale, 54 hp tractors to bulldozers and other larger machines, while allowing a single person to build up these machines using a small overhead crane like was used above. Thus, the reality of the lifesize erector set – made of a minimum number of  components, and easy-to-handle, modular pieces – is coming to reality. Add metal melting and hot rolling to this, and we’re much closer than we think to a universal capacity for building modern civilization from abundant scrap metal.

We tried using the Trovebox app to upload the pictures straight there, but it wound up being more clumsy and it was much easier to email them and put them on Trovebox at the end.

We also had some design work going on during part of this process. TODO people names helped work on some open design problems by discussing them in the hangout, commenting on issues in GitHub, and working on the wiki. So this was really a design-build-documentation sprint!

In theory it’d be better to finish all the design before starting the build. In practice we often have overlap, either because it’s a small problem that we’re confident we can figure out during the build, because we hit unexpected problems, or because we get antsy and head out to the shop a little sooner than we should 🙂

There’s was plenty more to do if we had more remote collaborators who were interested. Other steps include:

Dan is working on a program which reads the assembly guides and generates a bill of materials (an overall parts list) based on specially formatted parts listings in each stuff. If that works well, we’ll have created the bill of materials too, in the same sprint.

The next step is to use the new guides to reassemble the ironworker. This will give us an opportunity to fill in a few missing pictures and improve each step’s instructions as we do them. By creating the guide during the disassembly, we make efficient use of the disassembly and reassembly by getting 2 opportunities to take pictures and making 2 passes over the text to get it perfect!

This was an amazing way to enable remote and distributed contribution! These tools and this process let many people all work in parallel and help us develop the global village construction set as quickly as possible.

We’d like to thank the Shuttleworth Foundation for funding this work, the volunteers who contribute their time and expertise, and the makers of all these wonderful free tools which allow us to collaborate in this amazing way.

If this sounds interesting, get involved!