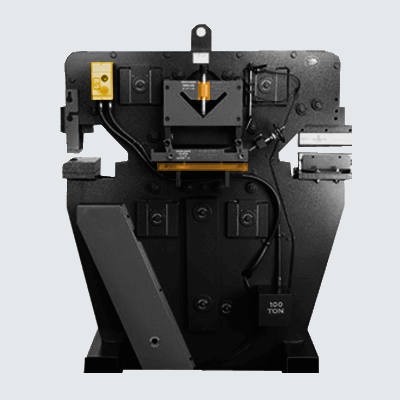 The ironworker machine is a device that can instantly cut steel and punch holes in metal thicknesses of 1″.

We have shown that our modular construction methods allow us to build heavy duty machines like an Ironworker Machine – which sustains 120 tons of force at the cutting blade, while retaining a 7 thousandths of an inch blade gap throughout. In 2012, we built the second prototype of the Ironworker in 6 months, and in 2013, we succeeded in building a radically simplified, modular version in 12 hours. We found that the standard 1/2″ wall square tubing (4″x4″), pivot plates, and bonding plates work in extreme (hecto-ton scale) force applications while retaining precision alignment. This serves as proof of concept that the same bolted building method that we use for our tractors is relevant to high force, semi-precision machines.